When Simon Wardley was a CEO he set out to find effective ways of doing business strategy. Finding none, he ended up creating his own way of doing business strategy that is grounded in lots of other peoples’ work. Wardley Mapping is a synthesis resulting in topographical intelligence, specifically for business. This specifically-for-business aspect is what I find most appealing. It removes the need to import inadequate metaphors (like sports or military) into the business context.

Wardley Mapping, while maybe new to some, is grounded in time-tested knowledge such as Sun Tzu’s Art of War, Diffusion of Innovations, OODA loop research, etc. It is a useful synthesis of these fundamentals reframed in the business metaphor context. The name “mapping” brings attention to the most visible aspect of Wardley Mapping, but the entire practice is about strategy and doctrine.

The full description of Wardley Mapping is beyond the scope of this post. This is less of an introduction and more of a mention that Wardley Mapping, its strategy, and its doctrine exist and are worthy of your attention as a substitute for whatever sports or military metaphors you may harbor.

Simon Wardley’s definition of strategy is the most useful one I’ve come across. He points out that strategy is a cycle consisting of Sun Tzu’s five factors, two types of why, and integrating John Boyd’s OODA loop.1 Richard P. Rumelt outlines three minimal elements needed to form what he calls a kernel of strategy: a diagnosis, a guiding policy, and a set of coherent actions.2 As we can see in the illustration below, the two definitions are coherent with each other, with Wardley’s description providing more detail and dynamics. 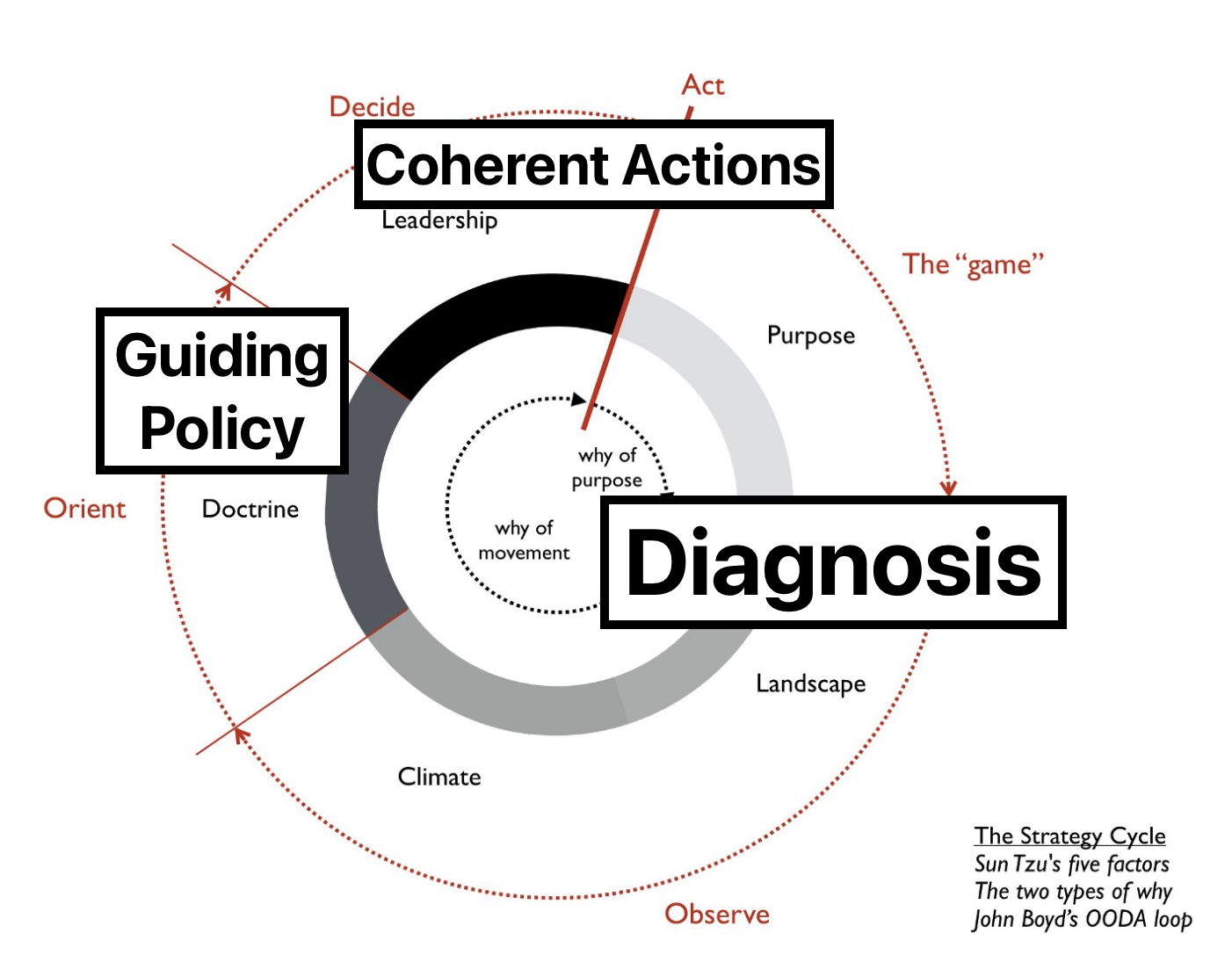 Why Maps and Mapping?

Simon Wardley, borrowing heavily from military history and having identified the essence of strategy, noticed that something essential within the military context of strategy was missing from the business context of strategy: a map. Once again, Wardley provides the most useful definition of a map I’ve come across.

The six most basic elements of a map are: visual representation, context specificity, position of components relative to some anchor, and movement of those components.3 These are depicted below as an example on a topographical map we are used to. 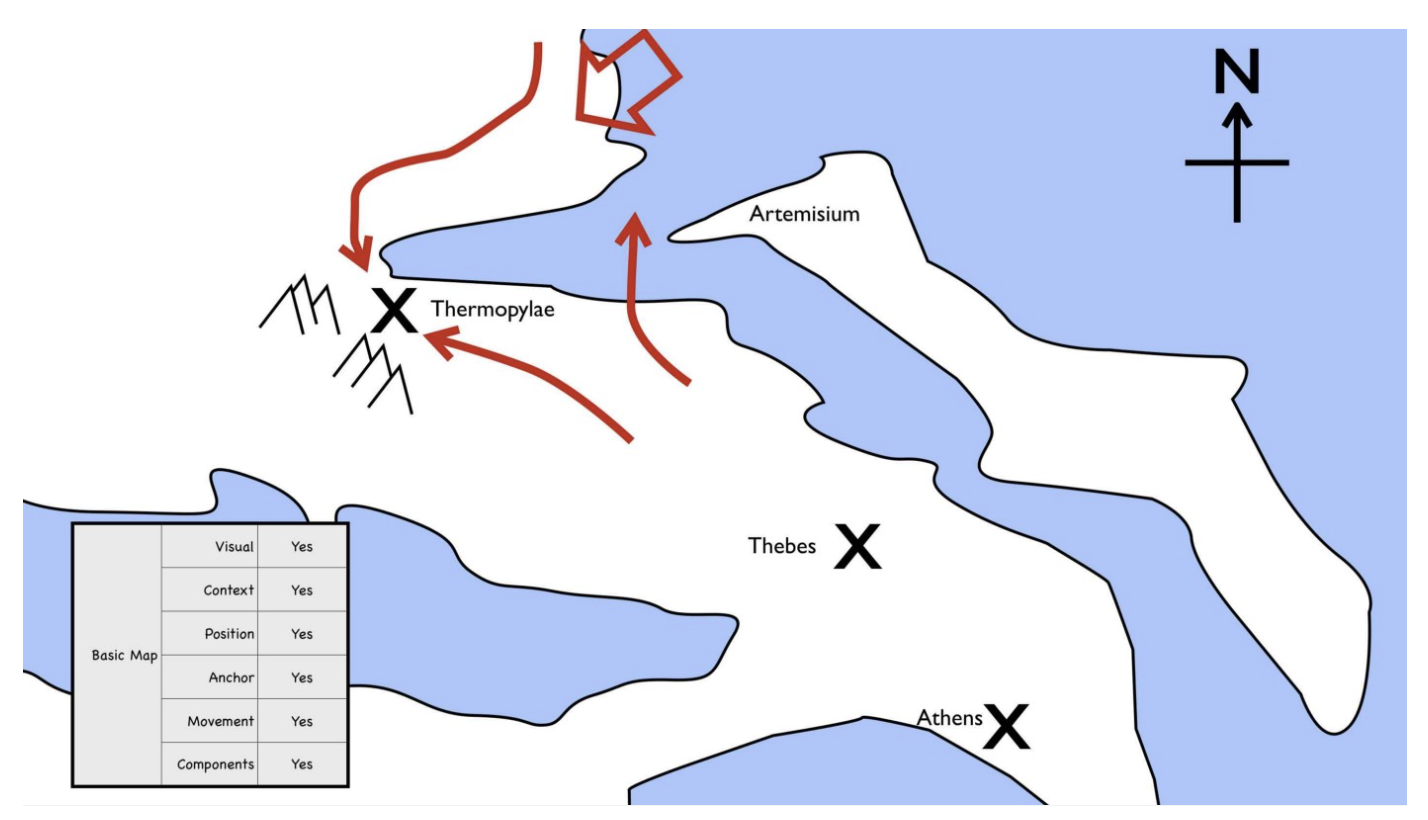 Having identified the basic elements of a map, Wardley took it a step further and introduced maps into business context by designing Wardley Maps that incorporate all of the elements required for reliable learning.

The map is visual and context specific i.e. it is unique to that line of business containing the components that influence it at that moment in time.

The map has an anchor, which is the customer.

For example, the Customer cares about online photo storage, which requires underlying components like Data Centre and Power, those are further away from the Customer and hence less visible.

The components of the map also have a stage of evolution, the horizontal-axis.

Genesis: This represents the unique, the very rare, the uncertain, the constantly changing and the newly discovered. Our focus is on exploration.

Custom built: This represents the very uncommon and that which we are still learning about. It is individually made and tailored for a specific environment. It is bespoke. It frequently changes. It is an artisan skill. You wouldn’t expect to see two of these that are the same. Our focus is on learning and our craft.

Product (including rental): This represents the increasingly common, the manufactured through a repeatable process, the more defined, the better understood. Change becomes slower here. Whilst there exists differentiation particularly in the early stages there is increasing stability and sameness. You will often see many of the same products. Our focus is on refining and improving.

Commodity (including utility): This represents scale and volume operations of production, the highly standardised, the defined, the fixed, the undifferentiated, the fit for a specific known purpose and repetition, repetition and more repetition. Our focus is on ruthless removal of deviation, on industrialisation, and operational efficiency. With time we become habituated to the act, it is increasingly less visible and we often forget it’s even there.

All the components on the map are moving from left to right driven by supply and demand competition. The components evolve.5

With this basic map structure, we can represent a business context directly (without an intermediate metaphor). Maps are a communication and learning tool through which we can better understand business and strategy.

What Do You Think?

How do you think about strategy? Does your method support learning spatial and temporal patterns? Let me know in the comments.

Now that we have a reference frame for business within a business context, we’ll be able to highlight some high-level patterns to be aware of, in Doctrine.